Age of the Gods : Fate Sisters Playtech has recently launched the Age of the Gods pokie suite — a superbe series of games based of super natural characters and themed on ancient Greek mythology — which is making a lot of noise in the online casino gaming world. The British casino expert is releasing a total of 7 titles, namely Age of the Gods, Furious 4, King of Olympus, Battle of the Gods, Prince of Olympus, Goddess of Wisdom and finally Fate Sisters, for which this is the review. 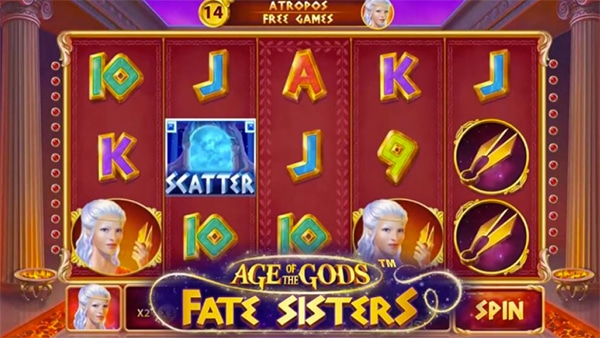 Age of the Gods : Fate Sisters by Playtech

Age of the Gods: Fate Sisters focuses on the incarnations of fate and is inspired by Greek mythology. This new Playtech 3D pokie has 5 reels and 25 paylines, and is bursting with great features. Players can enjoy free spins with multipliers, as well as random and sticky wilds. There is also a fabulous progressive jackpot that could change your life in one spin. The betting range varies between $0.25 to $ 250 per spin, which makes this game suitable for all budgets.

Special Features of Age of the Gods: Fate Sisters

As with the other Age of the Gods 3D online pokies, Playtech spared no effort in designing Fate Sisters. This opus features a celestial temple in the background, and on the reels you will see several objects associated with antiquity in addition to the main characters: Lachesis (Decima), Clotho (Nona) and Atropos (Morta), the three sisters of destiny. The gold coin acts as a wild and can substitute for all other symbols to help players form more winning combinations except for the scatter.

The blue swirl is the scatter symbol, and when you get 5 of them across the reels, you win 10,000x the amount of your stake. It’s also the most lucrative symbol of the game, and when it appears simultaneously 3 times or more on the screen, it triggers the Fate’s Portal feature. Once activated, you have the choice between 3 different free spins features, each one associated with one of the sisters.

The Fate’s Portal Feature is dedicated to Free Spins. As stated earlier, each of these sets of free spins are associated with a different sister.

Lachesis’ Temple
If you choose Lachesis, you will receive 10 free spins during which the wilds are locked on the reels for 3 of the spins. Each time you get a new wild, it’s locked in place for 3 other free spins. When Lachesis appears on the middle reel, three additional free spins are given to you.

Clotho’s Temple
Clotho grants 8 free spins during which 3 wilds appear with each spin. When it appears on the median spin, you receive 3 additional free spins.

Gamers who enjoy Ancient Greece and its fascinating mythology will also find satisfaction with The Legend of Olympus by the phenomenally talented team at Rabcat.

Sisters’ Gift is another interesting feature of this Playtech pokie. This is a re-spin that is activated during the base game when Lachesis appears on reel 1, Clotho appears on reel 3 and Atropos pops up on reel 5 simultaneously. The icons of the sisters will then be locked on the reels for the next spin, thus helping gamers to generate more winnings.

This Age of the Gods series is currently available a most good Playtech casinos, such as our favored Casino.com, and also includes a game where players can win a progressive random jackpot. To do this, they must choose 3 identical gold coins among the 20 that will be displayed. Gamers have the certainty of winning at least one of the 4 progressive jackpots available once they access this game.

Age of the Gods: Fate Sisters is another excellent pokie game from Playtech, and is already available on most of online casinos powered by this developer. There’s no doubt that a relation exists between the release of Age of the Gods pokie series and Marvel — and their stunning comic book themed games — pulling out of the casino industry all together. Having be bought by Disney, it’s rumoured that the comic giant is doing so in order to perfect its family friendly image. Let’s see how Playtech manages to built the Age of the Gods branding and create a strong following for this suite of interesting titles.

The largest jackpot at Age of the Gods: Fate Sisters is obtained through its Progressive Jackpot, which can reach in the millions.

The payout % of Age of the Gods: Fate Sisters is approximately 93%

Age of the Gods: Fate Sisters is played across 25 paylines and 5 reels.

Age of the Gods: Fate Sisters is a Playtech pokie which is offered at Casino.com.