The red carpet of Cannes has better watch out, because once you will have gone through the Cinerama pokie at S Casino, the next step is fame and wealth! The online 3D pokie Cinerama brings players to the center of the action, the only real action that counts, the one that happens next to projectors and cameras on the set of the most legendary movies! Be honest, have you ever dreamed of joining the pantheon of movie stardom with the likes of legends such as Marlon Brando, Al Pacino and John Wayne? Whatever your preferred style of movie, you necessarily find it on Cinerama, in addition to real money to collect during your climb of the star system! 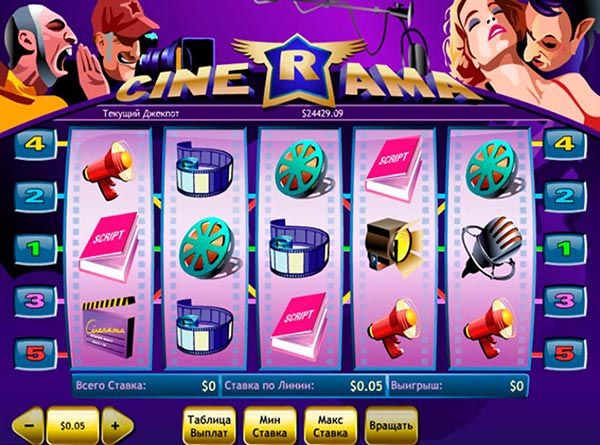 To become a movie star, you need talent. A lot of talent. But that’s not all, as you must be prepared to encounter many obstacles and hardships along the way that will lead you to fame and recognition. Fortunately, the Cinerama pokie machine provides a glimpse of what one could expect in such an endeavour.

Features and Bonuses of Cinerama

Cinerama is a five payline five reels pokie that admittedly is starting to looks a bit dated although this fact somehow works in favour of the feel of the game. Regular players will recognize the Playtech style as in its earlier form with a background that includes a director holding his camera and a classic film pose of a woman bitten by Dracula. This pokie might be considered kind of dated but one thing it offers is a huge number of symbols. The reels feature iconography associated with the world of Hollywood; players will discover a Hollywood star, a microphone, headphones, a film reel, a roll of film, a studio projector, a clap, a film camera, a speakerphone, a script, a film director and a film projector.

Looking for something completely different? Let’s try The Dark Knight Rises, a 5-reel and 243-ways Batman themed pokie by the boys and girls at Microgaming,  or even the amazing Immortal Romance, a dark medieval adventure of the heart also by the same game developer.

The Movie Projector is the game’s wild symbol. Like most Wild symbols in pokie games, it replaces all regular icons to create winning combinations, with the exception of the Director bonus symbol as well as the Headphones during the Box Office bonus game.

Cinerama offers two bonus features: The Director symbol bonus game is activated when at least 3 symbols appear in a row from left to right across an active payline. You get to be the director and pick a female and male actors for the main roles in a film. Your bonus prize will depend on your choices. The second bonus feature – the Box Office bonus – is triggered when the Headphones land anywhere on the reel number 1. You swill then choose one of four films which are competing for the box office record of the coming weekend. As a bonus prize, you will get a share of the movie’s box office profits.

On Cinerama, you can play online slot machines to finance your career as an actor or actress, and learn the ropes through the elaborate and faithful subject. You have to learn by heart the names of turning tools? Do not worry, they are all present on Cinerama! You must develop your sense of criticism in correctly judging the films of your potential competitors? Cinerama is doing that too! At the end of your game Cinerama slot machine, you will be a critical expert, a specialist of filming, and a player with all the tools necessary for success in the world of Hollywood!

One more thing: to the success of all the actors that are found today in theaters. Luck. Until 2016, Leonardo DiCaprio appeared out of luck at the Oscars after a twenty year career, but he did had the chance to get noticed early. If you want to do the same, you must rely on some luck! And what better way to test and sharpen your luck than with an online casino game? Featuring 5 reels, 5 paylines, a wild symbol, a progressive jackpot and bonus games, you can measure your luck at every stage. And once you will mastered your luck and all accrued all your gains, there’ll be only one thing left to do: walk the red carpet!

Our Thoughts on Cinerama

Cinerama is gradually taking the appearance of a classic pokie, as it’s been on the market for a while and is one of Playtech earlier releases. Nonetheless, this pokie still has its charms and several movie fans will enjoy its cinematic theme and feel. The simplicity of gameplay of Cinerama makes this pokie an interesting option for beginners. For players on a shoestring budget but who also want a go at a progressive jackpot, Cinerama is one of the better pokies on the market.

What is the maximum jackpot of Cinerama?

What are the special features of Cinerama?

Cinerama offers a Bonus Game, Free Spins, a Wild symbol, as Scatter and a Progressive Jackpot.

What is the payout % of Cinerama?

How many paylines and reels does Cinerama have?

At which casinos can I play Cinerama?

Cinerama is a Playtech pokie that you can play at S Casino.