We’re used to seeing the leading casino game and platform developer Playtech release pokies themed of popular entertainment brands, stars and shows in the likes of Marilyn Monroe and The Sopranos. Playtech now delves in the world of vintage video games and is proud to launch a title based on one of the very first computer games; Space Invaders. Explore a true classic of the gaming world, one which was originally played in the early 80s on the legendary Commodore 64 computer. 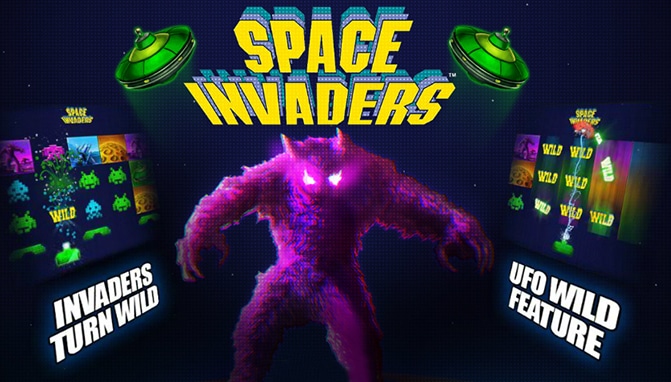 Space Invaders makes a surprising come back with this superb video pokie featuring 5 reels and 10 pay lines, skillfully designed in order to bring us back 35 years in the past when computers were just entering the domestic market. Gamers will enjoy the vintage illustrative simplicity of 80s graphics presented alongside period sound bites. Younger players will discover a pioneering game while older ones will be thrilled to reconnect with a timeless classic. For the vintage computer and arcade gaming nostalgic, Space Invaders is an endearing journey back a generation ago, and one that will allow his or her to aim for interesting prizes as well.

In the true spirit of Space Invaders

The brain child of the celebrated Japanese game creator Tomohiro Nishikado, the video pokie Space Invaders is launched in 1978 and stuns the arcade gamers, who were accustomed to pinball machines and simple mechanical games. Space Invaders is based on extraterrestrials invading the world, which in the 70s was an extremely popular concept many times explore through films and TV programmes. The Playtech version of Space Invaders recreates this theme to perfection, complete with over-sized pixels and simple graphics. The game also stays faithful to its main elements, namely aliens, flying saucers, space monsters, planets and even the famous laser gun which moves along the bottom of your screen..

The graphics of Space Invaders are a mix of images formerly used in promotional material for the game and 3 of its original pixelated space monsters. In an ascending payout, you’ll discover blue, green and purple space creatures, a blue laser gun, a green space ship, a large purple space creature and an orange planet. The latter is the game’s highest valued symbol during the base game with a 150 coins payout when you line 5 of them across a payline.

Another great classic to recently hit the reels — this time coming form the world of music — is the very successful Jimi Hendrix. This Net Ent title is part of a rock legend trio which also include Guns N Roses and the recently released Motorhead.

Begin your space battle with bets starting at $0.01 and going as high as $20 on each payline. This means a wide wagering possibility with betting options varying between $0.10 and $200 per spin.

You will soon find that Space Invaders provides a unique gaming experience. This is immediately noticeable due to the presence of a laser gun at the bottom of your screen. This gun moves along the width of your screen and will fire bursts of laser if it stops at reels 2 and 4. It will launch a burst of laser burst that will eliminate low value symbols and will replace these with a Wild symbol. This allows you to create winning combinations, as well as to double your earnings.

A unique feature called UFO Wild will be triggered when the gun and the tiny pink spaceship which occasionally flies over the reels are lined up on a reel. The laser will then shoot at the spaceship, thus activating a free spin allowing up to 9 wilds that land randomly on the reels. This will give you the chance to win great prizes including ones several hundred times your wager.

Thanks to pixelated graphics and faithful sound bites which are very much in sync with the original video game, the overall spirit of this pioneering title is very well replicated. The pokie Space Invaders offers an opportunity to younger gamers to get acquainted with a timeless classic and for older ones to revisit an important part of their youth. With a very wide betting range, Space Invaders will also suite all wallets. The only things that could have made this game better is the option to choose the number of paylines. But even with small negative detail, Space Invaders is well worth a try.

What is the top jackpot of this pokie?

The top base game prize of Space Invaders is 150X your bet. For this, you must obtain 5 Orange Planet symbols on an active payline.

What are the special features of this pokie?

Special features of Space Invaders include free spins, 2 wilds and a turbo function.

What’s the payout percentage of this pokie?

How many paylines and reels does this pokie have?

Space Invaders has 5 reels and 10 paylines.

Space Invaders is a Playtech pokie available at Casino.com