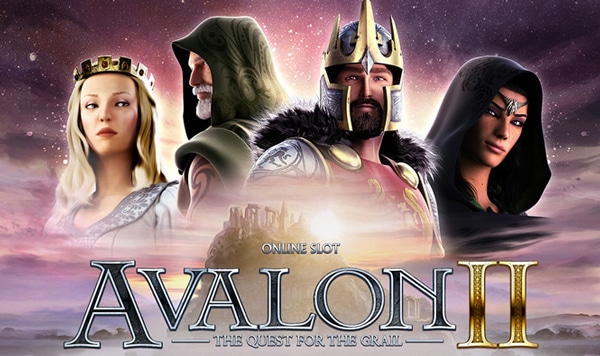 Avalon II is the sequel to one of Microgaming‘s most popular pokies. The original Avalon online casino game enjoyed instant success when it was launched in 2006 and has since remained one of the favorite pokies for players in Australia and elsewhere around the world. Faced with the popularity of the title, the mobile version of Avalon was also launched in 2010, followed by a multiplayer version in 2013. The Avalon II pokie features 5 reels and 243 Ways-To-Win offering up to 8 bonus games.

Avalon II allows you to play 30 to 150 coins per spin to try to activate one of the 243 winning combinations. This 3D online game also has 8 bonus games that allow you to start the quest for the Grail. To get to these bonus games just get 2, 3 or 4 symbols that represent the Grail on any reel.

Upon launching the game, players get to enjoy an extremely well designed game, one which possesses its own strong iconography and endearing style. Gamers familiar with the original version will find strong similitudes, although with a vastly updated and improved title that explores the fascinating English folklore.

Just like the original Avalon pokie, symbols present on the reels are characters intrinsic to Arthurian Legends, namely a Black Knight, Morgan, Guinevere, and Arthur. The highest paying symbol is the game’s logo, which is also the base game wild, offers 20X your line bet when lining 5 of them.

As previously stated, the game’s normal wild symbol is the Avalon II logo. This 3D online pokie also features an expanding wild symbol; the Lady of the Lake. When this symbol appears, it can take all 3 frames of a single reel. The bonus game Forest Falls also offers a Trailing Wild; this means that this wild expands and then holds its place for the next spin.

The Grail symbol is the scatter symbol in Avalon II. It will multiply your wins and can pay out in any position. It cannot be substituted by the main wild symbol and as well by the expanding wild. Scatter gains are calculated by multiplying the combination payout of the scatter by the total quantity of regular coins wagered. Regular wins are added to scatter wins. If you have a regular win and a scatter win, you will receive a paid out for the 2 wins, as the scatter doesn’t need to land on consecutive reels to trigger a win. Three or more scatter symbols anywhere on the reels will trigger the grail bonus game.

The Merlin symbol is another one to keep an eye out for as it can also increase your chances of a win. When you see this wizard appear on a winning line you will receive a mystery multiplier. Even if the bet isn’t a winning one, Merlin can still give you a cash prize.

Discovering the Arthurian Legends will be interesting for most gamers; if you really enjoy this folkloric theme, we recommend that you also try out Forsaken Kingdom by the lesser well-known game developper Rabcat. which has made quality the hallmark of its offering.

Start playing this stunning pokie at All Slots Casino if you have a preference for feature-packed online pokies. Avalon II, far exceeds all expectations and offers both complexity and abundance. It would be too lengthy to give a detailed description of all the special features of this amazing 3D pokie, but here’s a quick summary:

This Bonus is triggered with the Grail Scatter symbol appearing 3,4 or 5 times across the real. 120,000 coins are the maximum potential win during this mini game.

The White Knight will give gamers a choice of 5 shields.

Gamers must match 2 Helms to enjoy an extra win.

Players are given 20 Free Spins in addition to rolling reels.

Conquer the Black Knight in order to recover the grail

Gamers get to Spin the Wheel of Avalon to receive a prize.

Avalon II is one of the most popular online pokies, and rightfully so. Good design, strong branding, a theme based on actual folklore, tons of features and 120,000 coin jackpot makes this pokie a winner which ticks all the boxes and is one of Microgaming’s flagship games.

Avalon 2 has a 120,000-coin maximum jackpot which is available during the Grail Bonus game.

Avalon 2 is a Microgaming pokie available at All Slots Casino.