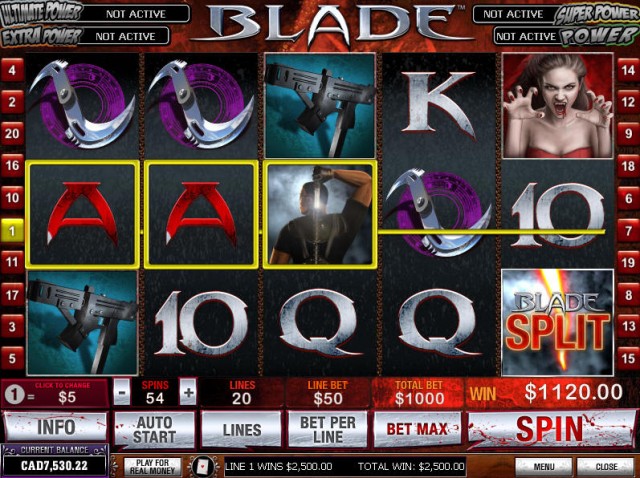 Powered by Playtech, this pokie is not only graphically vivid but its fun factor is just as intense where the player assumes the exciting if not chilling role of a vampire on a mission. And all the while instead of collecting blood, the player collects something much more marvellous and useful in the form of bonuses. Play Blade pokies at Casino.com.

Cut through the bad pokies with Blade – a cut above the rest!

This classic Marvel comic tale spins the yarn of a woman whose bite from a vampire was mistaken for an animal’s bite instead and she was treated for such. Inevitably she died but her baby boy was successfully delivered her baby. However, due to the bite this was no normal human baby boy. He was born blood thirsty with extraordinary healing powers, superhuman strength and all the enhanced senses a vampire could possess. Blade is definitely one of our favourite pokies from the Marvel collection.

And it is this very same, now adult, vampire who leads the player to this 5-reel 20-line multi-coin video pokie game. The player cannot helped but be drawn to the game with the same enthusiasm of a blood starved vampire because the action is full on with plenty of dazzling extra features. The player seems to be consistently given chances to win and the incredible sound effects draw the player even more into this winning world. If you like this pokies then we suggest you also take a look at other Marvel pokies such as Captain America, Daredevil and Ironman.

The game features many bonuses which cut through any boredom like a knife, in addition to what seems to be an infinite number of attention-grabbing aspects and Wild and Scatter symbols. This is definitely one of the best Playtech pokies available to the Australian market.

The ‘Blade Split-Symbol Feature’ occurs when the blade split symbol appears anywhere on the fifth reel and the last symbol in any winning combination will be split into two and will count as two identical symbols with combinations of six possible. The player can obtain this feature in free games too. Once the Blade symbol appears, it activates fifteen free games with a growing multiplier. They begin with a random initial multiplier of x2, x3, x4 or x5. Moments after every winning spin, the multiplier increases in steps of x2, x3, x4 and x5 and after every non-winning spin, the multiplier goes down one step. The Marvel Mystery Progressive Jackpot is a force to be reckoned with too!
Like we say, Blade is certainly a cut above the rest of the pokie games and not such an awful bloody one either! Play Blade pokies at Casino.com.