Travel back 70 years amidst World War II, as yankee super hero Captain America battles his nemesis, Red Skull. Everyone heard of this American super hero who is part of the Marvel Comics universe of bad and brave characters. This badass pokie version, designed and launched by the gaming powerhouse Playtech, is based on the 2011 Hollywood blockbuster movie Captain America, The First Avenger. It’s 1942 and America has just entered World War II. Our protagonist, Steve Rogers, has just been rejected from the military. He’s a sickly but very determined young man who makes the timely encounter of Dr. Erskine, a scientist heading a top secret experimental project called Rebirth. At the heart of this project is the Super-Soldier serum, of which our hero gets a dose and acquires super powers and the biggest physical human potential. After Dr. Erskine’s assassination at the hands of his warmongering archenemy Johann “Red Skull” Schmidt of Nazi Germany’s HYDRA organization and Hitler foot soldier, Captain America ventures to avenge his friend, and thus an epic battle of hero versus villain begins. 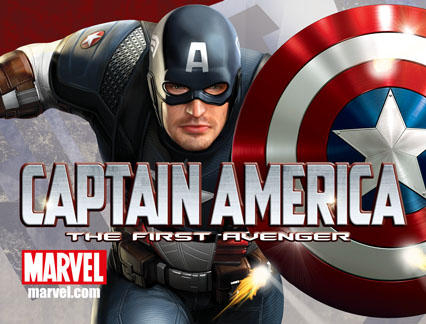 In recreating the First Avenger, Playtech has given us a very entertaining and fun pokie game. This 20-payline and 5-reel pokie features 2 playmodes; the regular mode as well as the bonus “Free Games” round. Displayed on the reels, players will find Captain America and Red Skull as symbols, but also Steve Rogers, Captain America’s shield, the German cross, a Power Soldier military tag and an army helmet. Overall, the design quality is quite high; the console features excellent graphics and many of the symbols also become animated. The regular play is rather uneventful, but the game performs adequately with a kind of modern techno-ish background music. The Captain America insignia triggers the bonus round and scatter payouts; this happens randomly and can reveal itself even during a loosing round.

If you enjoy this super hero themed pokie, you might also want to take a look at Spiderman, Attack of the Green Goblins, another Marvel and Playtech collaboration.

When the player attains the jackpot round, called Free Games With Power Features, the music changes and we can feel something fun is about to happen. A different screen appears as a battleground where Captain America and Red Skull will have it out; in the middle, 9 squares hide bonus features. As our hero is hit with thunder strikes, these features are revealed one by one. These include, extra games, Super Spins, expanding wilds and multipliers. Then the fun begins as you get to enjoy your bonuses to the sound of an upbeat music. The Super Spins come at the end of the bonuses and are presented as the Hero Super Spin and the Villain Super Spin. The Captain America pokie offers fantastic fixed jackpots; its highest fixed jackpot, the Captain America jackpot, awards 12500 coins, where as Red Skull offers 5000 coins.

Captain America is a fun pokie; it’s jackpot rounds make us wanting to wait for them and the jackpots can be quite generous as well. Discover this upbeat pokie at S Casino, which is one of the better online casinos.

What are the special features of this game?

What is the largest jackpot at this game?

Captain America’s largest jackpot is of 12,500 coins, which is won when landing 5 Captain America Wild symbols on an active payline.

What is the RTP % at this game?

Captain America is played across 5 reels and 20 paylines.

Where can we play this game?

Captain America is a Playtech pokie available at SCasino.