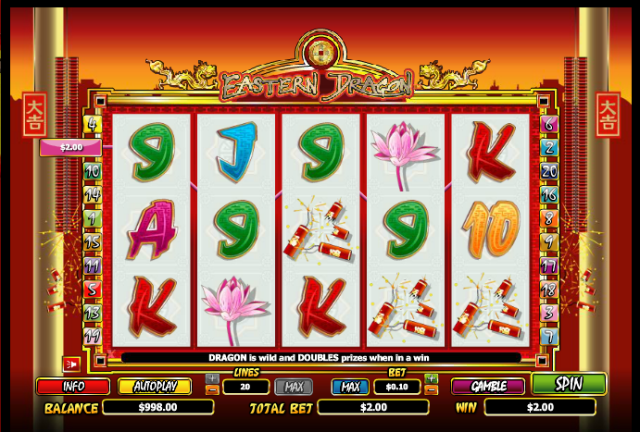 Eastern Dragon is a Chinese themed pokie game that throws you back in the oriental period. The game is a none-progressive 3D pokie, offering 5 reels with players being able to select up to 20 paylines. As you would expect, symbols within the game are based around Chinese culture and include koi fish, dragons, lanterns and even dragons. The game uses the usual card system but goes down from Ace, King, Queen, Jack Ten and Nine.

Eastern Dragon is a fun game that is suitable for all bankroll sizes, the minimum bet is $0.01 with the max bet per spin being $40. The graphics are simple and clean, although they could be improved some what. Game sounds are minimal with the odd sound clip when players make a spin. When players win free spins, out of no where appears classical Chinese music played at a super fast tempo, which is actually quite awesome.

The wild symbol is the dragon and can be used to substitute all symbols expect for the scatter to give players more winning lines. The dragon symbol can end up on any payline to come into affect and will also act as a multiplier. Players who manage to get the wild symbol to land on reels 1 and 5 will open the free spin bonus round and will also complete all available combinations. Players are awarded 15 free spins during the bonus.

The traditional Chinese coin symbol will give players a win if they land anywhere on the screen. 2 scatter symbols will give the player 1 coin, while 5 offer the chance of winning 200 coins. All scatter wins are multiplied by the initial size of the bet and added to the players regular line pays.

To make things even more interesting, Eastern Dragon offers players the gamble feature. This feature allows players to double up their winnings. After winning a spin, players have the option to gamble in order to go double (or quadruple or nothing. Double or nothing involves guessing the correct colour of the card (red or black), while quadruple involves guessing the correct suit.

Eastern Dragon is a simple and easy to learn game that gives players the chance to win big for such a small stake. Combining free spins and quadrupling down can result in some very big payouts. Eastern Dragon can be found on the Microgaming network and at Spin Palace casino and All Slots Casino. To find play other entertaining pokie games, check out our homepage.

What are the special features of Eastern Dragon?

What is the largest jackpot at Eastern Dragon?

The largest jackpot of this game is 3,000 coins when lining 5 Carp symbols across an active payline.

What is the RTP % at Eastern Dragon?

How many reels and paylines does Eastern Dragon have?

This game has 5 reels and 20 paylines.

Where can we play Eastern Dragon?

This game is a NextGen Gaming pokie available at All Slots Casino and Spin Palace.