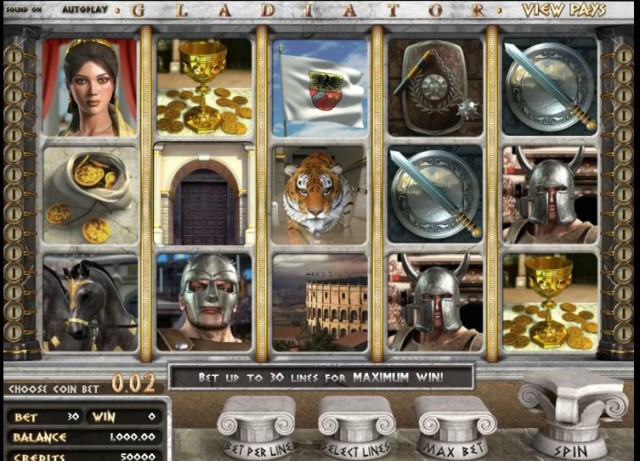 The all conquering Gladiator is fighting his way into the pokie community, with this 5-reel, 25-line game from Playtech. Boasting a top prize of 5000 coins this is a truly really authentic pokie with all the characters and clips taken from this modern classic. With a coliseum backdrop and ancient styling used throughout, Gladiator offers pokie and movies fans a mass of excitement. Sound effects and actual movie footage are used within the game play, to capture player’s imagination and give them a sense of a genuinely good pokie. Even though, the excitement can lack at times, Gladiator is a very easy pokie to play with an enticing array of extras to fixate on. Playtech have gone to some lengths to ensure that no stone has been left unturned in creating a pokie that fully replicates the dramas and anticipation the movie provided. Play the Gladiator pokie at Grand Reef casino.

With a 5000 coin jackpot being classed as fairly low for this type of game from Playtech, it does hold some very entertaining bonus rounds which can be considered to be some what of a consolation. The first is really unique free spins round, which starts by adding an extra scatter on the reels before it begins. This gives players a big payout before the spins commence. Three or more coliseums are needed to trigger the free spins, which can appear anywhere on each of the five reels. The second named “Gladiator round” is triggered when three 3 wild symbols land on reels 2, 3 and 4 respectively. After an exciting clip for the movie is played, players select helmets from the grid, with anything up to 90x their bet a possibility. To add further anticipation to each winning line, Gladiator offers players the chance to double or even quadruple their payout. This allows players to continually increase their winnings until they choose to collect and back the cash. A simple card based game is used for this feature, with players choosing colours or suits. The detailing used throughout each of the bonus round is very impressive and this does contribute to the way it makes players feel.

Movie themed pokies are becoming very popular amongst Australians. If you like these type of games you may also be interested in Tomb Raider and Rocky.

The game will most definitely prove appealing to both low and high rollers as playing the smallest of stakes proves just as effective. This is a very detailed pokie with every feature taken from the movie, but it does require more in terms of excitement and obviously a bigger jackpot. On the other hand, the easy of play does make it a dream to use with no fuss spins proving an attribute that many will warm to. Play the Gladiator pokie at Grand Reef casino.