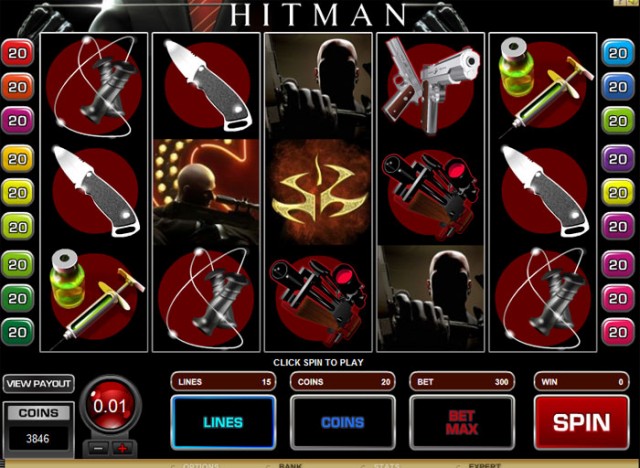 Developing a pokie from a renowned movie and video game is always demands respect, and usually produces quality not matched by other manufacturers. The “gun-for-hire” blockbuster returns in pokie form, replicating the sounds and atmosphere seen and heard in the game. At first glance the pokie gives the impression of a dark and eerie machine, backed up by the tense music playing in the background. The Hitman pokie really does replicate the video game in every possible way, from the likely character and weapon symbols to shadowy design used throughout. Play the Hitman pokie at Casino Mate.

Hitman harbours a typical 15 line payout and uses relative Hitman icons to stick as close as possible to the much loved game. As a result of this, the graphics used in the pokie are excellent quality with plenty of attractive icons taken directly from the game. The relatively small jackpot of 4000 coins and 20 coin maximum line bet shouldn’t put anyone of playing this as there are a variety of different bonus features that can easily top this. Alongside the standard symbols, Hitman offers an array of special features that involves the user being more involved with game play. One such feature is when 3 Insignia logos are matched 1,2 and 3 were the user must select a symbol to reveal a cash prize.

This is one of our favourite Microgaming pokies. The graphics are stunning, and the bonus features go a long way to ensuring this game will be remembered in the history of pokies. If you like titles like this, then there are a couple of other pokies we suggest you also try; Tomb Raider and Hellboy.

This game becomes a lot more exciting when players match 3 bonus logos within the last three reels. Not only that, when two have already landed Hitman extends the suspense of the final reel stopping to create a really tense feeling as the prospect of big money is so close. When three bonus symbols are matched the standard 15 line pokie machine transforms into a Hitman mode, revealing a scenario in which the user selects a target and a weapon to take out the crooks. Each possible combination has a random coin payout so however the player decides commit the crime; the payout can be just as spectacular. The highly detailed interface changes this game into much more than just a pokie as the player is now involved in role play, allowing a much more personal feel to each game.

A cool feature within this pokie is when any of the middle three reels reveals a wild symbol, which is Agent47 casually clutching a pair of pistols. By activating this wild symbol, the player is met with a short clip taken directly from the game, alongside this that reel becomes neutral meaning it acts as a connection to any other winning lines surrounding it. Also, matching three 18 logo symbols gives the player a chance to win up to 18 free spins, each providing the chance for a massive payout.

Overall, this game is a joy to play, and the entertainment factor really does add to the feel of each spin. The Hitman franchise has been transferred very well to pokie machine and should be given the respect it deserves. Play the Hitman pokie at Casino Mate. which also allows you to play all their range of pokies in free play mode.