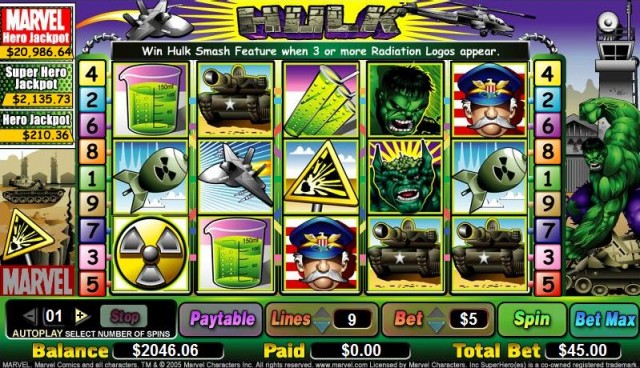 The 2008 superhero film came straight from those now age-stained, well- worn pages of the Marvel Comics Empire. A fabulous classic tale of a reluctant superhero, the Hulk’s alter ego Dr. Bruce Banner becomes a vulnerable pawn in a military scheme to reinvigorate the ‘Supersoldier Program’ through gamma radiation. He desperately tries to rid himself of the Hulk alter ego before he is captured by the general but when he comes face to face with a monstrous and power hungry creature aka Emil Blonsky, his worst fears are realised…
The choices that Hulk pokie machine players have are thankfully less daunting than Banner’s daily decisions. First there are three betting options. The coin size varies from 0.01 to 5.00. The paylines can be varied from 1 to 20, but it is better to play with all paylines enabled and the number of coins can be varied from 1 to 10. Play the Hulk pokie at Casino.com.

Three special symbols depict The Incredible Hulk because the Hulk himself is the wild symbol. It appears only on reels 2, 3 and 4. Therefore when the Hulk wild symbol appears on the central row of reel 3, it expands to occupy the entire reel. A moment later, 2 re-spins are offered with the remaining reels spinning. When it appears anywhere on reel 2, reel 3 and reel 4 it expands to occupy all the three reels. After this, 1 re-spin is offered with the remaining reels spinning. The Smash Bonus feature can be won during re-spins but not the free spins feature.

Software developers Playtech have done a fantastic job in creating this online pokies game. It is one of our favourite in the Marvel pokies range along with Ironman and Captain America.

The scatter symbol is The Incredible Hulk Logo and when three or more appear anywhere on the reels scatter payments are won. Additionally, ten free spins at tripled payouts are awarded to the player. During the free spins the expanding Hulk appears more frequently to offer additional advantage. The free spins can be re-triggered continuously; however this evades the Smash Bonus feature activation.
Another special symbol is the Smash Bonus Logo and when this appears simultaneously on reel 1 and reel 5 the Smash Bonus feature is activated. This is an action packed feature. At the very moment of activation, seven police cars appear on the screen and the player guides the Hulk to decimate three of them to win bonus credits. If the Hulk Rage feature is randomly triggered, the Hulk independently smashes all seven cars for you and you will be instantly awarded more credits. Of one out of three helicopters are smashed out then the multiplier is revealed.

We highly recommend that you give this pokie machine a go, if not only to get to the Smash Bonus feature which is definitely an exciting highlight and you never know your winnings could leave your own friends turning green… with envy! Play the Hulk pokie at Casino.com.