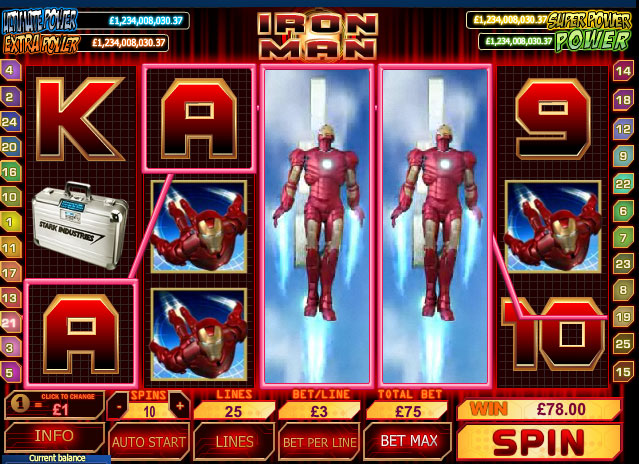 Iron Man is a 5 reel, 25-line payout game includes the likely symbols of Iron Man masks, logos and characters from the hit movie. Playtech’s update to the original Cryptologic release has all the ingredients to be a big hit, the superhero status, the exciting marvel theme, and a huge progressive jackpot. Iron man boasts three progressive jackpots, dependant on stake, and a bonus game that is sure to capture the imagination of any fan. The design of the pokie is very eye-catching, with the Iron Man colours used throughout, as well as the traditional superhero sounds that are played when winning combinations are hit. The fast growing jackpot is clearly visible and the animations used within game play are very impressive, capturing the superhero theme perfectly. Play the Ironman pokie at Grand Reef casino.

Finding blue prints is the aim of the game here if you’re after large cash prizes, although revealing safes full of cash can be just as rewarding. As well as cash prizes, wilds, multipliers and free spins all feature in this round, showing that it really can pay to hit those Iron Man Logo’s. The animation in the bonus round is very realistic and highlights the Iron Man capabilities. This glass shattering bonus round is topped with an edge of seat music display, drawing the player into Iron Man’s boots for this action packed scene. To top of the chances of winning, when two or more scatter symbols are present in this pokie, players are paid out generous amounts depending on the amount. Three iron man logos will reward players with the much loved expanding wild feature, in which iron man soars through the sky, yielding winning combinations across other pay lines. If three or more Iron Man Logo’s are hit on any of the five reels, the epic bonus round makes an appearance. Here players become the hero for the day and smash building panels to reveal an abundance of cash prizes.

This online pokies game is just one in the Marvel range that is available to play at Playtech casinos. We suggest you also take a look at X-Men and Captain America, all of which are available at Casino.com.

The consistent game play is very enjoyable although some of sound effects could be more suited to the Iron Man movie to give a more realistic feel. On the other hand, the animations are very impressive and give the pokie a much classier feel throughout. Attention to detail is Iron Man’s biggest achievement with small particulars such as the glass of whiskey symbol, which is taken from the fact that the Tony Stark drank this to cure his pain in the movie. Lastly, Iron Man is linked to every other Marvel Pokies that utilise the progressive jackpot system, meaning players are always in chance with winning one of the biggest pots available. The three tier system that is in places each offer a separate jackpot and all are triggered randomly. The tiers include Marvel Extra Power, Marvel Super Power and the big one which is aptly named the Marvel Ultimate Power Jackpot. Play the Ironman pokie at Grand Reef casino.