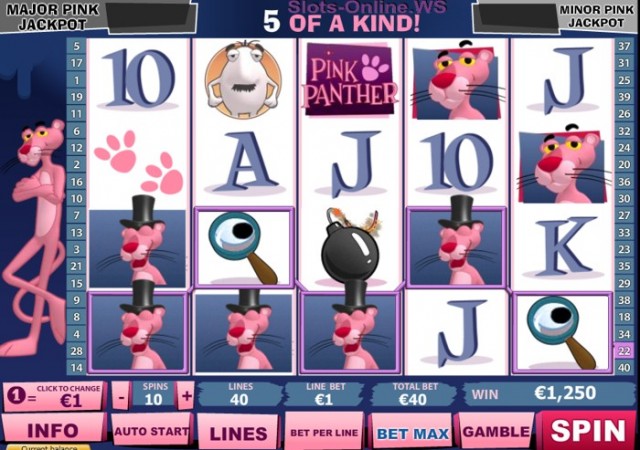 Most people remember our pink feline fiend defiantly and continuously painting the Little Mustached Man’s respectable house pink and there being very little the increasingly angry Little Man could do about it! Play the Pink Panther pokie at Casino.com

The Pink Panther began life as the main and title character in the opening and closing credit sequences of every film in The Pink Panther series. So popular was our pink feline friend, after cinema-goers saw cartoon ‘shorts’ before every film, that in the autumn of 1969, the cartoons gained a life of their own when they were regularly aired on NBC television. The Pink Phink had arrived! And each and every sketch was so carefully thought out and effective. The same can be said for the thinking behind the Pink Panther Pokie.

Pink Panther pokie is powered by Playtech software and so the graphics are as bright and colourful as the panther’s character itself. There’s a fantastic sound track to match which surprisingly combines the modern with the retro. The player sees clear bold images of the Pink Panther, the Little Man, and Inspector Jacques Clouseau with magnifying glasses. Pesky Pink paw prints, and overflowing cans of pink paint let you know just where the pink panther has been!