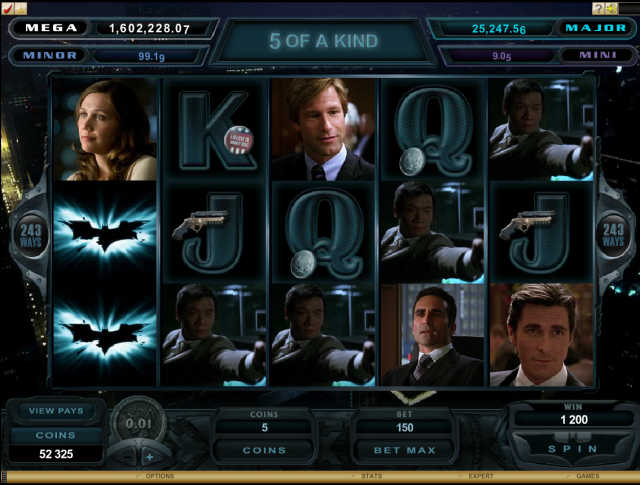 Courtesy of Microgaming The Dark Knight is a 243 Ways progressive video slot founded on the hit 2008 film that starred Christian Bale as Batman and the late Heath Ledger as the Joker. This exciting slot machine has a range of fabulous bonus features such as: Instant Prize, Win Multiplier, Wild Reels, Wild Symbols and Wild Re-Spin. The game also boasts stacked wilds on all reels and because it is affiliated to the Mega Moolah jackpot network, the winnings are always at least 1,000,000. Play the Dark Knight pokie online at Spin Palace casino.

The Dark Knight pokie will Light up your Life

It goes without saying that it would be the Batman logos which are Wild and easy to spot when stacked on all five reels. It’s not a bad deal either when the top line pay is 400 coins for either five Batman Logos or five Batman symbols on an active line. Don’t feel this is a great deal or a huge jackpot? You will when you start to realise that on one line you can get a whole screen of wild Logos thus giving you a much more remarkable 97,200 coin win! As you can probably guess, this is one of our favourite online pokies!

After the 400 coins deal, if you see five Bruce Wayne symbols, the next highest pays are 350 coins closely followed by 300 coins for five Joker symbols. It is downhill from then on I’m afraid as wins come in at between 250 and 60 coins. However, the stacked wilds mean you can get the same wins on a lot of ways per spin.

This is one of many movie themed pokies from software developer Microgaming. Fans of these types of games should also check out Lord of The Rings and Hitman.

One thing is for sure, you won’t be kept in the dark with The Dark Knight – it will light up your life with the unmistakable glint of those gold coins flying out from the dismal confines of the Batman’s lair. Play the Dark Knight pokie online at Spin Palace casino.