A Reel Treasure by Playtech

The Mummy is an extraordinarily entertaining video pokie game based on the 1999 Hollywood production of the same name, and of its sequel, The Mummy Returns. In the blockbuster The Mummy, Evelyn Carnahan, a British librarian, starts an archaeological dig in an ancient city called Hamunaptra. As the story unfolds, another group of explorers end up unleashing a curse laid on the dead High Priest Imhotep and by doing so, ‘The Mummy’ becomes awaken, and this obviously spells trouble for everyone. PlayTech unwrapped all its creativity and talent to dig and revel to the world this popular online game in 2012. Players will be dazzled; This blockbuster themed pokie will surprise, charm and may even put you under its spell with its excellent graphics, fantastic sound effects as well as its gaming features and bonus rounds. 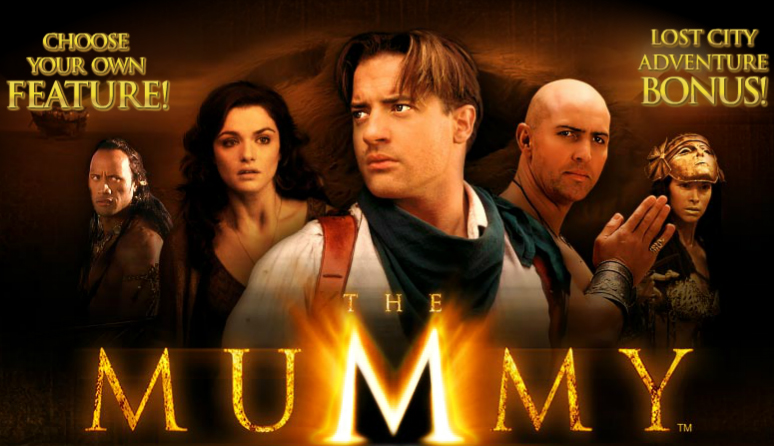 Visually, the game is a stunner; the effects and graphics are spectacular. Players will enjoy the mix of great animation, movie sequences and well designed symbols and graphic elements. The reels feature some of the main characters of the movie as well as its sequel, The Mummy Returns, including Brendan Fraser (Rick O’Connell), Rachel Weisz (Evelyn Carnahan and Nefertiri) and Arnold Vosloo (Imhotep).

A 25 payline and 5 reels pokie, This title will reveal itself as a guaranteed hit with pokie enthusiasts whether they’ve enjoyed this film or not. The bonus round is triggered randomly and is called the ‘Lost City of Adventure Bonus’. It’s great fun and could prove to be very generously. If you like this pokie, also try out another Playtech movie themed game, the Gladiator, based on the blockbuster starring Russell Crowe.

With this game, Playtech have once again demonstrated their ability in adapting popular Hollywood films to the online casino culture. And The Mummy has proven to be one most popular pokie games released as of yet by the gaming software provider. A multi-level adventure pokie game, This video pokie is different than the majority of online pokie games since players must unlock features as they play and this changes how the game unfolds. With many interesting and well thought out features and bonus rounds, The Mummy will defectively hypnotize the player as this is one very addictive game. You can play this amazing  game online at S Casino.

What are the special features of this game?

What is the largest jackpot at this game?

This title offers a base game jackpot of 10,000 coins that you can win when betting the maximum and landing 5 Rick O’Connell symbols on an active payline.

What is the RTP % of this game?

This title is played across 5 reels and 25 paylines.

Where can we play this game?

The Mummy is a Playtech pokie available at SCasino.