Find Thor, the Marvels Comics superhero god in the 30 payline pokie Thor The Mighty Avenger. Son of the god Odin and the earth goddess Gaea, Thor is known for his immense strength and his magic hammer Mjollnir. Enjoy a multitude of bonuses with the power of a god!

Thor The Mighty Avenger is a 3D online pokie featuring 5 reels and 30 paylines that showcases the famous god of lightning and a Marvel icon. The atmosphere of the kingdom of Odin and its dominant golden color form the background of the machine. Symbols that make up winning combinations are the images of the characters. With Thor, Odin, Loki and Heimdall as headliners. Other more minor characters are also present, such as the warrior Sif. Obviously, the classicly used letters (A, K, Q, J) and the numeral 10, present in other Marvel casino games await you. 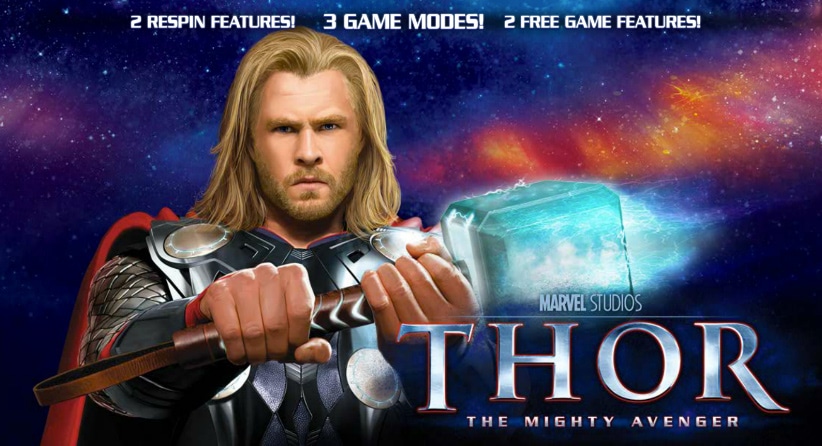 To start spinning at Thor The Mighty Avenger, simply adjust the amount you wish to play per line. Keep in mind that the game is set at 30 paylines and this number can not be changed. The played amount is automatically multiplied by 30. In terms of winning combinations, Thor is the symbol that pays the most (100 to 5000 times your bet depending on the amount wagered). Then comes Odin (from 50 to 1000 times the bet), Loki (25 to 500 times the bet) and Heimdall (20 to 250 times the bet). Sif and friends refer to 15 to 150 times the wager.

Besides the classic combinations of symbols, Thor The Mighty Avenger offers many bonuses of all kinds:

The Thunderstorm Respin, for example, starts when Thor’s symbol appears 2 times on the second reel.

The Free Spin Lightning, comes into play when Thor appears 2 times on fourth reel, allowing for a round of Free Spins.

The Rainbow Bridge pops in action when Heimdall’s symbol appears on the third reel. You can then choose an orb that will teleport you (if you come from Asgard, the main game) on Earth or to Jotunheim to get free spins. If you come from Earth or Jotunheim, then you will be teleported to either a free game (Earth or Jothunheim) or to the main game (Asgard).

Our Final Word on Thor

Marvel-Playtech pokies… They’re always entertaining and we designed. Like all Marvel pokies, Thor The Mighty Avengers are connected to 4 progressive jackpots (Power, Extra Power, Super Power and Ultimate Power) that can be triggered randomly. No need of stormy weather to have lightning at Grand Reef Casino!

What are the special features of Thor The Mighty Avenger?

Thor The Mighty Avenger has a Gamble feature, Scatter and Wild symbols, Multipliers, Free Spins and a Bonus Game.

What is the largest jackpot at Thor The Mighty Avenger?

Thor The Mighty Avenger’s largest jackpot is of 5,000 coins which is available when getting 5 Wild Thor symbols on an active payline.

What is the RTP % at Thor The Mighty Avenger?

How many reels and paylines does Thor The Mighty Avenger have?

Where can we play Thor The Mighty Avenger?